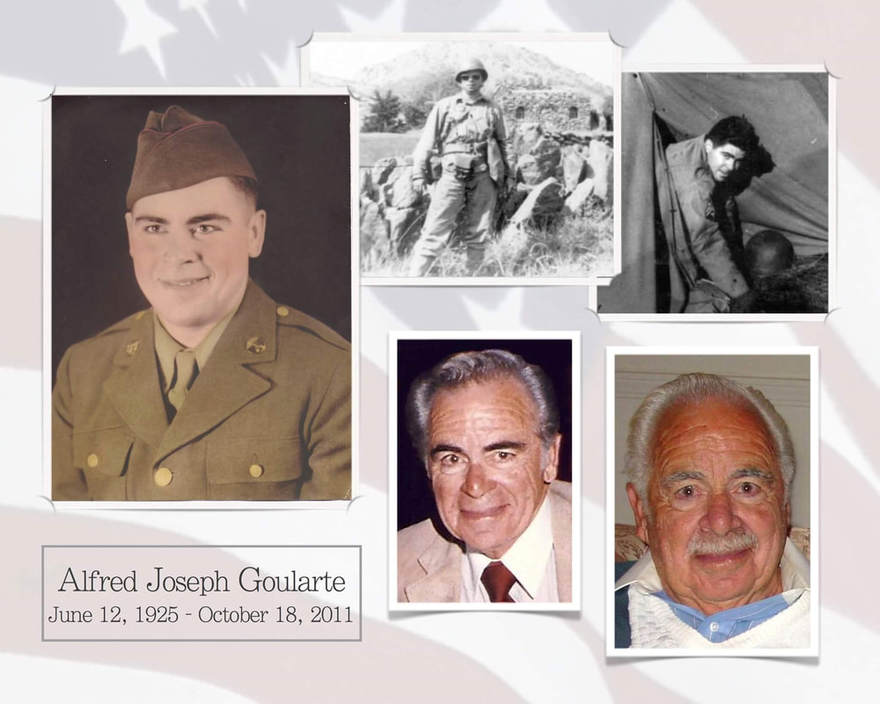 Alfred J. Goularte served in the U.S. Army overseas in France and Germany during WWII.  Upon returning home from his war time service he never eluded to what he actually encountered during his time served.  Corporal Goularte spent his time after service, dedicated to working as a truck driver and helping raise his family.  Once retired from his civilian career he rededicated his time, becoming a volunteer assisting other veterans at the Palo Alto Veterans Hospital from 1984 - 2002.  He was able to provide over 8,000 hours of documented volunteer service during that time.

Corporal Goularte was a simple and quiet man, so humble about his service that he led most to believe he was just a typical clerk during his service.  It wasn't until the president of Healing Hands, Healing Hearts viewed his uniform jacket at the Veterans Care Program ribbon cutting ceremony in Carmichael that the AIRBORNE tab on the dress uniform was brought to light.  Being an Army veteran, the HHHH president, David Dowdy, commented that Corporal Goularte was much more than a typical clerk.  The AIRBORNE tab is indicative that he served a much more involved duty during his time in that theater of war, in both France and Germany, that his silence about what he did was a sign that he was ready to put it behind him and focus on those that needed attention now.  To HHHH, this is the making of a hero.  He gave to our country with his life on the line and returned to serve our country by serving others that served.

Healing Hands, Healing Hearts has established the Alfred J. Goularte Veterans Care Program that we may embrace and honor the 'everyday' men and women who have bravely served our great nation in its greatest times of need. It is our goal to provide comfort, care and connection to our veterans who suffer from critically, chronically, and terminally ill conditions including PTSD related disabilities.  We embrace a vision of supporting Veterans in their journey, seeking healing on multiple levels as well as offering them training that will help prepare them to be there for each other in ways that sometimes only another Veteran can understand.


Learn more about training and services being offered around our Northern, CA branch:


Testimonials from some of the veterans we have served:

"I wanted to take this opportunity to thank you for your healing gift of massage. As a 100% disabled veteran your gift truly helps heal me on many levels. When I am on your table I transcend my body and expand beyond it. Being in the moment and Feeling your healing touch makes me forget my disabilities. Thank you for your gift to me and other veterans."J.O. Navy, 3 tours of Vietnam - Male Veteran
"I have severe ongoing back and neck pain from accidents that crushed two vertebra and ruptured a disc, as well as complex migraines from working near the Flight Line (I worked with the QA inspectors for KC135 air-refuelers) while I served in the Air Force. The fumes of the jet fuel began making me very sick but I was unable to change jobs for several years. I endured."

"Other than pain medication, which only works a small percentage of the time, nothing has previously worked to give me any relief. That is, until I started seeing Joan Marie for holistic massage therapy!"

"The stress and anxiety from living in constant pain while still having to conduct daily life, is often overwhelming. I really didn't expect much when I first visited Joan but felt I had nothing to lose. I was however very concerned that massage would cause more pain because I often cannot handle being touched. Thankfully my fear did not come true! Joan is very sensitive to what her client needs. I now can actually zone out (fall asleep) while receiving my massage. But the best part is the relief! After the massage, I have several days of FAR less pain and take far less medication. I also have days of feeling in my arm and hand, which are usually numb."

"I always look forward to my next visit with Joan Marie. I am forever grateful for her professionalism, experience, and help.  Thank you. "

L. R. Female Veteran
All donations matter, small or large.  Every penny of this program is dedicated to serving our veterans in need.
Click to set custom HTML